The Budleigh July tournament of 1898 attracted more attention than usual, for a player of unrivalled skill was to take part. A certain Mr.C.E.Willis had the previous year won the Open Championship at Wimbledon and it was put about that he was everywhere recognised as being the best player existing.
The earlier rounds of the All-Comers Challenge Singles were watched with great interest, especially the match between Mr.Willis and Miss Elphinstone Stone, a very fine player and the leading local lady. It was soon seen that this lady, as well as all his other opponents, were quite outclassed by Mr.Willis. Interest languished and it was felt that nothing in any way approaching a match was likely to be seen. Finally a novice, a young lady of twenty-one, who had never played in public before, was left to play the final round, best of three games, against Mr.Willis. This young lady had hitherto had easy victories. ‘That is the luck of the draw,’ said the cognoscenti. ‘This young lady reaches the finals and gets the second prize without opposition. It means that all interest in the tournament is over.’ 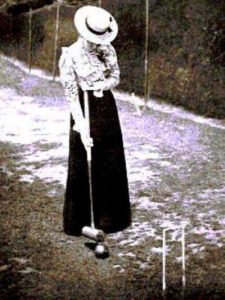 This judgement was soon proved to be over-hasty however. A strange rumour was carried to players still involved in matches on distant lawns. The novice was playing very well, and was running rapidly ahead of her formidable opponent. Soon, so it was reported, a ringing cheer startled the quiet town of Budleigh Salterton. Miss Gower, the novice, had won the first game. As can be imagined, the interest was now enormous.     All the spectators, and every contestant not actually playing a game, gathered round the lawn. Every stroke of the game was watched with breathless interest. Mr. Willis produced some of his finest play and won easily. Again the habitual commentators were in evidence with such remarks as ‘She was lucky in the first game but experience tells in the end.’ They were, however, completely confounded, because in the third game Mr. Willis had only five shots. Lily Gower went round in two breaks of 11 points and 12 points, and won by 26 points in thirty-five minutes. 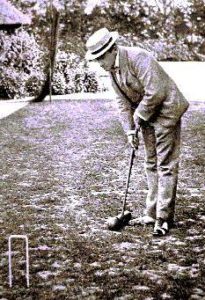 In the autumn of the same year the Maidstone Club had requested the All England Lawn Tennis and Croquet Club to allow their two challenge cups to be played for at Wimbledon because of a typhoid scare at Maidstone. Lily Gower entered this tournament and the following excerpts from a contemporary account of the tournament will give an indication of her performance on this occasion.
‘…..A novel feature of the meeting was the competition for the Maidstone Challenge Cups…One of these was the Open Challenge Cup, kindly presented by Mr.Ayres. This was in the hands of Mr.C.E.Willis. The other was the Ladies’ Challenge Cup, won at Maidstone last year by Miss Elphinstone Stone. The meeting was further remarkable, in as much as it introduced to the Wimbledon grounds the brilliant young lady player who beat Mr.Willis two games out of three at the Budleigh Salterton Open Finals. Miss Gower put her name down for both competitions.
‘… On Wednesday morning an important struggle took place, when Miss Gower found herself confronted by Miss Elphinstone Stone, the holder of the cup. The game fluctuated at first, but Miss Gower was not long in getting one ball round to the last hoop, assisted by one very forward and difficult break. Then, with the other ball for the fourth hoop, she laid a trap for her opponent. Miss Stone fired, and her doom was sealed.    Miss Gower went off after the shooting ball, and with a fine break of thirteen points, ran out. The grounds were difficult after the long drought, and the players were a little puzzled with Ayres’ spade hoop, which below the surface is a flat and sharp iron wedge, which gives an exact 4-inch, and is far more rigid than a hoop in an iron socket.
‘……On Thursday Miss Gower continued her victories.  In the afternoon, as winner of the Maidstone All-Comers, she was called upon to play one of three games with Mr.C.Willis, the holder of the challenge cup. Miss Gower soon obtained a lead, but, breaking down at No.4 hoop, let Mr.Willis in; but in a short time he went over the boundary, and it was soon evident that this delicate young lady, although exhausted from having played several games in the hot sun, was a very formidable opponent. She pushed on ball after ball with difficult breaks; she lost the innings three or four times, and at once recovered it by amazing long shots. In the gloaming she pegged out, having defeated the Champion of the United All-England Association by 21 points.
‘……The splendid success of Miss Gower on this occasion gave rise to difficult questions. Were these victories due to simple good fortune? This was the theory of some of her detractors when the subject of her previous victory at Budleigh Salterton was discussed. But as folks watched her calmness, her judgement, her confident and easy skill, a second question arose. Had any player ever played like this on the Wimbledon ground before? Miss Gower is very young, very delicate-looking. She stands quite upright to her stroke, and takes aim by putting the mallet in the first instance over the ball. She then strikes with confidence, careless apparently, whether the object ball is six feet or six yards away. Her tactics are simple – to scheme for the 4-ball break at all seasons. At this she is very deadly.
‘……Few will forget the excitement caused by her final game with Mr.Willis. She got in first, and kept the advantage until one ball was a rover, and the other to go out.       Then Mr.Willis got in with a long shot, and on the stroke, working the most difficult and brilliant break that he perhaps has ever played, became a rover with the intention of pegging her out. But he missed the peg, and the young lady got in once more, and became a rover with both balls. Again Mr.Willis got his chance, and this time he pegged out one of Miss Gower’s balls. The excitement became very great. Mr.Willis was working round his second ball with masterly boldness, and the young lady sending shot after shot within an inch of the winning peg. Then came the climax. Mr.Willis reached the last hoop, and the next break would have finished the game, when suddenly a shot more deadly than the others traversed the ground and hit the peg plumb-centre.’
The ‘Ladies Field’ magazine considered this victory epoch-making…’It proved that a woman, if armed with up-to-date implements, can compete with success in the severe and prolonged conflict of nerve, endurance, and hard work which a week of match croquet involves…’
Lily Gower played with a long-handled mallet weighing three pounds. In aiming she placed the mallet head over the ball and covered a black spot on the mallet with the handle, which she held very tightly with the right hand and very loosely with the left. She played her stroke entirely from the right wrist.

Lily Gower was daughter of Erasmus Gower of Castle Malgwyn near Cardigan, and she went on to become one of the all-time great women players.