[This was the old sequence game with the balls played in the order Blue, Red, Black, Yellow. Until 1905 the start of the game was from one foot in front of the first hoop. The ‘A’ baulk was not introduced until 1907. The arrangement of the hoops and pegs was the Hale setting (see diagram).There were two pegs, the winning peg, and a ‘turning peg’.   The order of the hoops was the same as now but after running hoop 6, one had to hit the turning peg before proceeding to one-back. There were no lifts and one could wire an opponent’s ball without penalty. There was the ‘dead’ ball, i.e. the opponent’s ball that had just played. One could lay up with the dead ball and put one’s partner ball to one’s next hoop. Thus, unlike the present either ball game, one’s opponent had only one ball to play with and thus a limited choice of shot, which, if missed, resulted in an almost certain all-round break by the expert opponent, ending with the opponent’s ‘live’ ball wired from everything. Many games between experts ended with the result 28-0, with the loser never taking croquet. As an average player I used to find the sequence game very interesting, particularly in doubles, where of course the partners had to play alternately. In the account below the ‘forward stroke’ was what we now call the ‘side-style’. The golf style of the second player was the most common style in the nineteenth century. It is hardly ever used today except by some players for roll strokes.]

Brilliant sunshine tempered by a slight breeze, a fast and true lawn, surrounded by an unbroken ring of spectators, evidently waiting for some more exciting match than that which is being dragged to a close by two performers rendered more nervous than usual by the unusual ‘gallery’ that criticises their play. Ah! That’s over at last! and the rattle of the stricken peg sends a thrill of expectation through the waiting crowd. From opposite corners, stepping lightly over the netting the two ladies for whom we are waiting. Both tall and fair, graced with the slimness of youth but markedly differing in face and style – alike however in the keen look which gathers quickly every detail of environment, and in the subdued promptness of preparation which marks the expert. One, who has won the toss, takes the lead with Blue and Black, in a feathery hat and trailing dress deftly gathered to leave the right side free for the sweep of the mallet, the other in blouse, short business-like skirt, and shady straw hat.

Blue plays with the forward stroke off the right foot, aiming with a characteristic airy poise, and hitting with a fine upward sweep. The ball runs well past No.2 and by the next stroke into 3 corner. Red follows with the golf stroke, played with startling rapidity, one glance at the object seeming to suffice. Gently through the hoop and a tice close to the peg is her response to Blue’s opening. Black takes up the gage and hitting red, rolls both to No.3 and lays the break for Blue. Yellow shoots but in vain. A roquet, an easily laid rush, and Blue is away with a break. Each ball in turn rolls, apparently by instinct, into the right position; running of hoops is child’s play, so perfect are the short approaches; Yellow is picked up from the boundary, and lies in the centre. Red is crossed to 2-back at the appointed time; cause and result seem automatic – but there is a check! The machinery stops; and Blue lies up against No.5 hoop. Something has gone wrong. An error of a few inches in direction, helped by the mysterious affinity between the ground and the natural perversity of the ball, and the turn is over. All Blue can do is play away from red, which lies dangerously near. Only 15 yards! Of course Red will hit. Before the majority have grasped the position, the lithe figure has straightened as the mallet swings and Red – misses.

Black will not make such a mistake, say the wiseacres, as she proceeds to roquet, split and rush the balls for the easy break left; and, as before, the automatic game goes on with a leisurely swing, and point follows point with a certainty that bodes ill for Yellow.   But there is always, or nearly always a but – Black repeats Blue’s error and comes to rest close indeed to Blue, but with the wire of 1-Back between them, and no ball open. There is nothing for it but to trust Yellow again. This time the slashing golf stroke is truly struck, and Yellow roquets Red in the centre at 14 yards. 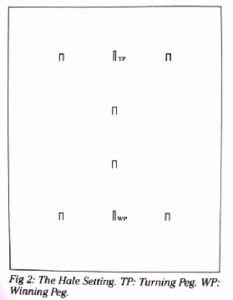 As has been aptly quoted of her, ‘When she is good she is very very good’, and with the perfect nerve and brilliant rapid execution, Yellow dashes off the 4-ball break to the first Rover hoop and lays the break for Red, Blue safely wired in 4-back. Blue can but corner, and Red repeats the break, making no semblance of a mistake until 4-back; there, with Black close by, she is short in her approach and leaves a difficult hoop – 3 yards and barely open! But she is well set in her game, and decides to take the risk – the ball takes the wire at the angle and spins through. A round of applause greets the plucky player, who finishes the break by making all Red’s points except the peg, placing Black near No.3 corner, and leaving Yellow with Blue and Red close by, all three protected from Black by intervening wires. Black lets drive rather on the principle of the slayer of Ahab, at a venture, but without analogous success, for the ball glances from a wire and runs harmlessly off the boundary. Yellow makes the last two hoops, gets a rush on Red and pegs out, winner of a brilliant game, to the enthusiastic delight of the large gallery, who have followed every stroke with keen appreciation and hail the victory of what was undoubtedly the best play.

Very marked is the difference between the two styles. The machine-like perfection of one is such as to evoke surprise when anything goes wrong; the rapid brilliancy of the other leaves the impression of a succession of tours-de-force with danger always near. Yet the machinery is, when necessary, capable of studied brilliancy, the less remarkable because of ease of execution; while the constant brilliancy resolves itself on analysis into real accuracy of stroke, disguised, or maybe embellished, by extraordinary rapidity. When next they meet, may I be there to see, and let not the issue be confined to a single game.

Differences in the Croquet Rules in 1900

The following are the most important differences from the modern game

The players, if not more than two, shall play alternately, and if more than two, alternately according to side, keeping the same order and balls throughout the game. The balls shall be played in the following order:- Blue, Red, Black, Yellow. Or Red, Black, Yellow, Blue, etc. according to whichever ball begins. If a player plays the first stroke of the game with the wrong ball of the unplayed balls, the balls shall be changed without penalty.

In commencing, each ball in turn shall be placed on the starting point, one foot from the playing side of the first hoop and opposite its centre.  When the striker’s ball has been so placed and a stroke taken, the ball is in play, and can roquet or be roqueted by any other ball in play, whether either ball has run the first hoop or not. If the striker’s ball was not so placed when the stroke was taken, the adversary may, before the second stroke is played, require the ball to be duly placed and the stroke replayed. If the starting point be occupied by another ball, the striker’s ball shall be placed in contact with the other ball, and a roquet deemed to be made.

There were no baulks and no lifts.

A player could wire an opponent’s ball from all the other balls without penalty.