By the early twentieth century the skills of croquet players had improved so much that many tournament games between top players were won by 28 points, with the loser never taking croquet. Certainly this happens all too frequently today, but nothing like so frequently as it did then. There were several reasons for this difference. First, the balls had to be played in sequence, so that at the end of his break, the player could easily lay a break for his partner using the ‘dead ball’. Second, there were no lifts, even for close wiring, so that the opponent was left with no shot at all. Third, breakdowns in a four-ball break were less likely because the hoops were four inches wide, and the old Hale setting with the two centre hoops close together, and the ‘turning peg’ (hitting which scored a point), was easier to negotiate than the present Willis setting.

As a result of all this there were numerous suggestions put forward in the Croquet Gazette during the early years of its life. Some of these were adopted, albeit at a much later date. However, one that had considerable support from such distinguished players as Cyril Corbally and G.F.H.Elvey was never adopted. It is interesting to read some of these proposals and to see how the alternative suggestion of the ‘Either Ball Game’, as we play it today, was proposed, almost one feels, in desperation, to avoid banning the four-ball break.

The Four-Ball Break – A Remedy

The correspondence started with the following submission from Cyril Corbally which appeared in the Croquet Gazette of 18th June, 1908, under the above heading. The Beddow Cup referred to is now The President’s Cup: -

…… When the spot stroke in billiards became merely a test of steadiness, it was abolished, and some years afterwards the anchor stroke met the same fate. We have an anchor stroke, or rather turn, in first class croquet, the four-ball break, and unfortunately it is still with us.

When a first class player begins one on a good ground he feels that if he fails it will be through blundering, and if he succeeds he will only bring off what is a twenty-five to one on chance, and in the process there will be no hazards to be overcome by thrilling efforts, which, if successful, will be a source of great pleasure; nothing but the monotony of baby strokes and fear of breaking down. The result of the break is interesting; the making of it very dull. This is not what good croquet can, and therefore should be.

The abolition of wiring increased the evil and took away one of the few varieties of the game. Three-and three-quarter inch hoops make three-ball breaks much more difficult but have only a slight effect on four-ball ones, while they encourage baby strokes and poky croquet to the detriment of more enterprising and dashing styles. Why not bar the four-ball break in ‘A’ Class events? We have alternatives in hoops, balls and settings; why not one more?

The rule I have tested is “A player shall not take croquet off more than two balls in his or her turn”. It is simplicity itself:  it encourages shooting, and if desired, the beneficial return of wiring, because to combine wiring and laying a game is so difficult under it that it is seldom worth while trying.

This was followed in the next week’s issue by a supporting letter from Elvey who had tried out the game with Corbally. He clarified the proposal by stating “A player at the beginning of his turn may roquet two balls, and after making any point, may roquet the same two balls”.

There was also some support from a middle-bisquer: -

Here are comments from two of the many objectors: -

……...May I venture to express my opinion that the two-roquet game would prove to be most uninteresting for most of the tournaments carried out under the flag of the Croquet Association, where the majority of players competing are not of championship form.    Two or three point breaks would become the order of the day, and perhaps two-ball breaks would be thrown in to make things lively.  Who would be most bored, the players or the spectators? The game, now so fascinating, is very good as it is, and the four-ball break has justly made it so. Why abandon it?                 J.Brewin Holmes…………………

……..Are there going to be two sets of rules for croquet in future: one set for the ’A’ players and another set for the ‘B’ players? For this is what those gentlemen who object to the four-ball break are leading up to. And would this radical change be conducive to the real interests of the game? Do the second-class golfers have a bucket into which to hole their puts instead of the ordinary orifice? Do second class tennis players use a net a couple of inches lower than their superiors? Are inferior billiard players supplied with a table with pockets six inches wide? In cricket should the wickets be narrower and the bats broomsticks?………….

There were also many facetious letters with suggestions for such things as the eight-ball break, abolition of the boundary, specially prepared undulating lawns, etc.

The “Choice of Balls” Game

The Either Ball Game was first suggested by a Mr. Payne in 1903, and was again proposed in the 1905 Gazette by one Gilbert Coventry. It was introduced as an alternative in 1913, but it was not until 1920 that it was adopted exclusively. Here in 1908 we see it suggested as an alternative to the ‘two-roquet’ game.

……..The objection to the four-ball break appears to me to be, not in the break itself, but in the complete control it gives to the in-player over the position of the balls at the end of the break, and his consequent ability to leave an exceedingly difficult shot for his opponent. This would be effectively remedied by the proposal made by Mr.Tickell (1908) to allow the player at the commencement of his turn to play with either of his balls. The in-player could then only leave a shot half the length of the lawn, and, if this was missed, he would still have only a three-ball break to start on, and probably not even that. The out-player would have a better chance of obtaining the innings and the in-player would obtain a second break only as a result of definite skill……………..

Other correspondents supported the proposal, including one who even suggested adopting both the either-ball game and the two-roquet variation.

It must be admitted that many of the criticisms of the four-ball break expounded by Corbally and his supporters do still apply today in top class games in spite of the narrower hoops, the either ball game, the more difficult Willis setting, and the lifts at one-back and four-back. This is no doubt due to the even greater skills of present day players, and possibly to better lawns.

Is it perhaps time to consider a further modification to the laws, for example contacts at one-back and four-back? One might even try the two-roquet game.

Incidentally the sequence game makes an interesting variation, especially for doubles, where partners are bound to take alternate turns. Try including it when you are organising a croquet fun afternoon. 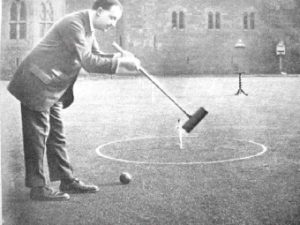 Lord Tollemache, whose great tome on croquet was published in 1914.This dealt mainly with the old sequence game, but he included a chapter at the end on the either-ball game.      Note the circles round the hoops. These were another innovation intended to increase the difficulty of the four-ball break. One had to run the hoop from outside the circle.