The first issue of the Croquet Association Gazette appeared on Wednesday 27th April 1904, and the remaining parts of Volume 1 on 30 subsequent Wednesdays between then and 29th March 1905. Each issue consisted of 16 foolscap pages of fine print, with occasional photographs of celebrities, and four un-numbered pages of advertisements. The latter were mainly from croquet equipment manufacturers, of which there were no fewer than five. The secretary at the inception of the Croquet Association was Henry C. Needham, and the editor was C.D.Locock, the author of ‘Modern Croquet Tactics’, published first in 1907. He remained editor until 1915. 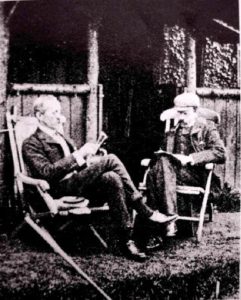 The prolific nature of the Gazette continued until the outbreak of war in 1914. For example the 1909 edition consists of a great tome of 312 pages with almost as many separately numbered pages of advertisements. The latter included those for tournaments, for croquet equipment, and for hotels. Many hotels ran croquet tournaments. For example the Bath Hotel at Felixstowe claimed five full sized lawns, and the Edinburgh Hydropathic advertised ‘The best croquet lawns in the Kingdom’.

Croquet clubs (many of which are no longer with us) seemed on the whole to be much better endowed with courts, and were all busy with tournaments (80 listed in 1909).  There were in those days about 2000 members of the Croquet Association and many of these must have attended a large number of tournaments, judging by the number of entries recorded. For example, at the two Bournemouth Club tournaments there were over 200 and over 300 entries. Incidentally the Bournemouth Club used to play at Dean Park before it was disbanded many years ago. The new Bournemouth Club is of course situated in Southbourne.

In June of 1909 the Hurlingham tournament had record entries of 36 in the A Class Singles, 72 in the B Class Singles, 136 in the Handicap Singles, as well as 12 pairs of Open Doubles, and 62 pairs of Mixed Handicap Doubles. The meeting was reported as being very successful thanks to the manager, who spent 8 hours’ work on the draw alone.

Prominent features of the gazettes were the tournament reports (as they still are) but some of the accounts were really quite long and often included digressions or anecdotes that make amusing reading now. Here are some snippets.

From the Sidmouth Tournament:

……..The plan of drawing lots for events at the commencement of each day’s play appeared to give general satisfaction, and when the referee was seen playing on the worst court, some of the competitors thought that a kind of croquet millennium had arrived. Miss W. Heap, a lady who will not be out of her teens for some time, distinguished herself by winning both the ‘B’ Singles and the ‘B’ Handicap. Her accurate hoop running from anywhere from 3 to 5 yards – her usual position for a hoop – and her delightful innocence or disregard of any tactics other than rolling two balls from any distance to her hoop were refreshing to watch….

From Newcastle, County Down:

…….A rather curious thing happened on Friday afternoon; a player busy with a break looked up and saw a cuckoo sitting on the second hoop……..

This was followed next week from the Peels by:

………The players were cheered by the songs of the birds and the distant voice of the cuckoo. It is true that we did not notice any cuckoo enjoying the play while seated on a hoop. Such incidents are reserved for Ireland, yet we occasionally thought we caught a glimpse of one sitting IN a hoop…….

It is probably true that all accounts of croquet tournaments mention the weather. In 1909 the tournament scribes had much to say on this subject, as by all accounts, it was an atrocious summer.

From Felixstowe in June:

…….The two courts extemporised from the lawn tennis club were, well, what such courts are bound to be, and when the cold spell set in towards the middle of the week and the North-Easter was blowing, they provided as much fresh air to the square inch as the most voracious appetite for Felixstowe could desire………

At Lincoln in June:

…….It was the stuff you wash in that we perpetually lived in from morning till night…..we played in it, walked in it, sat down in it, and the referee sometimes even lay down in it.     Good fresh water, we understand, costs 3d a gallon in Lincoln, so the expense must have been ruinous, but all seemed to go home pleased, a fact on which Mrs A.King Brook the Hon.Sec. may well be congratulated, as her duties were considerably trying at times in a tempest with rain falling at a rate of 10/6d a square yard……..

The correspondence column was a major feature of the Gazette and controversial topics were discussed at length and sometimes with cutting sarcasm, but always most politely. The fact that replies to letters could appear in the following week’s issue tended to keep interest from flagging. The laws in those days were still in a state of flux and there were consequently many letters posing questions that had arisen in games, and reading them makes one realise how fortunate we now are to have such a comprehensive law book. Correspondence on controversial croquet subjects would require an article to itself so I give below a selection of excerpts from letters on various other subjects.

The following are the last two in a series of seven sarcastic letters:

A Protest. May I express in the invaluable Gazette how tedious I find Mr. Capell’s contumelious letters? Can’t you persuade him to adopt a more amusing style?

A Reply. A member of the Croquet Association, Mr. Hawtrey by name, is suffering from boredom. So profoundly interesting a fact he naturally hastens to make known to his fellow associates. As the tediousness of my letters has unwittingly produced this unhappy condition in Mr. Hawtrey, may I offer him my sincere sympathy, a sentiment which I feel he will readily extend to myself, when I tell him that I too have similarly suffered every week, after perusal of most of the letters in the Croquet Gazette. Hitherto with a modesty which now appears excessive I have abstained from uttering a ‘protest’, and have endeavoured to think with a tolerance for others which Mr. Hawtrey might strive to emulate, that many of these communications are deeply interesting to your readers. I fear, however, that I can but hold out slight hopes to Mr. Hawtrey that his criticism will in any way alter the wording or character of my letters. His remedy, however, is simple. Let him study the signatures of your correspondents before he reads the letters, and those to which my name is appended let him pass by unread.  Mr Hawtrey is so bold as to suggest that I should attempt to be amusing. Heaven forbid! For I should then be violating the most solemn traditions of this worthy journal. It would require the satire of a ‘Junius’ and the wit of a Sheridan to raise its pages from the ‘damnable dullness’ into which they have fallen.

After which the Editor closed further correspondence on the subject.

The following letter appeared in the Gazette of 16th January, 1913, and gave rise to considerable correspondence.

Sir, It is a sad sight to see youngsters from public schools, and Varsity undergraduates taking part in croquet tournaments. When the English representatives did so badly at the last Olympic Games, many said that the nation was becoming soft. These critics would probably think their opinion justified when they saw young fellows deserting cricket and football to play a soft game like croquet. While we are young our quick eyes and good nerves can best be utilised while we are playing a fast bowler with a deceitful break, or while we are shooting at goal with other fellows charging at us. This view was generally held some twenty years ago, and we should have laughed at any schoolfellow or fellow undergraduate performing with a croquet mallet. Surely the Croquet Association might set an age limit to men taking part in croquet tournaments, for the sake, not so much of croquet itself, as of English athletic standards.

The following tongue-in-cheek criticism seems a little unfair.    It started……

…….In Notes of the Gazette of May 6th 1909 I read: ‘The new design on the cover, in celebration of the completion of the fifth year of the Gazette, will probably not escape notice.’  That simple remark doubtless proved correct. For my own part I noticed it with astonishment, and since then with pain, grief and amusement……..What can be said in favour of the present design? Nothing that I can see, except that the surface of the field – I cannot write lawn or court – apparently does credit to the groundsman. On the other hand the picture is ludicrous in every way……..

The letter continued in similar vein for some way, and concluded:

….But in all seriousness, could we not have a more appropriate design for the coming season?

The design turned out to be the same for 1910. It was at the top of the front page of each issue, often accompanied by a Jaques advertisement for ‘Glisglos’ Compo Croquet Balls at 20/- per set of four! Prices of other equipment are equally startling, e.g. ‘Corbally’ mallets at 10/6d. How times have changed.