The accuracy of the rush will of course depend on the distance apart of the two balls involved. The further apart they are, the less accurate the rush is likely to be – as every croquet player knows. But how does the accuracy of the rush compare with that of the long roquet – or, to put it another way, how close do the balls have to be to attain the same accuracy in a straight rush as in a simple long shot? 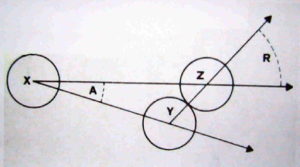 The answer to this kind of question can be found by reference to the diagram of a rush shown in Figure 1. Here X is the striker’s ball and he attempts a straight rush along the line XZ on the ball marked Z. In general there will be a slight error in his shot so that his ball will travel along the line XY. The error in this shot is equal to the angle marked A, and as a result of this error the roqueted ball Z will travel along a line that deviates from the required direction by the angle marked R. The straight rush has turned out to be a cut rush, albeit only a slight cut if the balls were close together to start with. The question is – how large is the angle R compared with the angle A for a given separation of the balls X and Z?

Some values of angle R for various values of angle A and separation between balls X and Z are shown in Table 1. The first column shows the error in the shot, i.e. angle A, in degrees. The remaining columns give the magnitude of angle R, the error in the rush, for various separations of the balls in the rush. The separations are measured in ‘ball spaces’, i.e. a value of 1 corresponds to a space of three and five eighths inches between the balls. 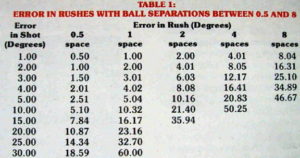 It will be seen that for small errors up to at least three degrees, the error in the rush is almost exactly proportional to the number of ball spaces. Thus, for an error in the shot of one degree, the error in the rush is also one degree for a ball space of one; two degrees for a ball space of two, and so on. This applies to all reasonable errors in a straight rush because 99% of the shots of the ‘average player’ (as defined by Dr.Grundy – see Croquet Gazette no.144, 1977) fall within three degrees of the aiming point.

Thus to make our rush as accurate as our roquet, we must lay the rush with the balls separated by only one ball diameter. Note that we can make the rush ten times more accurate than our roquet by placing the balls only one tenth of a ball diameter apart, i.e. about one third of an inch apart. This is effectively what we do in the wafer cannon (see SWAN 14 (1995)) where we can arrange the balls by hand in the precise positions required. It is difficult to lay an ordinary rush as close as this – a slight bump in the ground may be sufficient to roll the ball aside. However, it is not necessary to go as close as this; one ball space is small enough, and this can be achieved easily with a little stop shot if the rush is to be laid near the spot where the roqueted ball came to rest.

To convert the angles in Table 1 to distances on the court, an error of one degree corresponds to a miss by thirteen inches for a twenty-one yard shot, e.g. a shot or rush from Hoop 1 to Hoop 2. For the ‘average player’ about one third of his shots are in error by one degree or more. Although a roquet missing by thirteen inches is useless, a rush to within thirteen inches of the hoop is excellent and can easily be achieved from Hoop 1 to Hoop 2 with a ball separation of one ball diameter, provided of course that the strength can be judged correctly. On the other hand, with the balls of the rush one yard apart (about ten ball spaces) the corresponding error would be eleven feet!

The beginner may well ask why do we not always lay the rush with one ball space between? The reason is that another factor has to be taken into account. A rush like this presents a perfect double to an enemy ball situated in a direction at right angles to the rush, and even if the rush is pointing directly at the enemy ball, the opponent will be tempted to shoot because if he misses it may not be possible to get him out into court AND regain your rush. The moral is therefore to wire at least one of the balls in such a short rush. To avoid leaving a tempting target for a long shot when the balls are not wired, the balls should be two to three feet apart: a foot is not enough, it still gives a considerably greater chance of a hit (see Croquet Gazette No.182, 1985).