“……Near the village of Wimbledon, on the very brink of the railway that hurries you thither and then bears off the rest of the passengers towards Southampton, Bombay, Jamaica, or wherever they may wish to go, are four acres of grassy land. These acres are laid out in three terraces, the one above the other, and on each terrace are four croquet-grounds. Amongst these (the corners being cut off to make way for them) are sundry edifices, half haystack, half summer-house, but in a sleety wind or a blazing sun you will not in any way regret that the principle of beauty has been sacrificed to the consideration of utility. If ugly, these buildings are very commodious. A gay striped marquee, and a pavilion with a bar of ecclesiastical woodwork, complete the accommodation. I must mention, however, a dozen and a half gigantic white umbrellas stuck up on long poles all over the ground; these umbrellas tend to collect together round any important match.

From a croquet point of view, these grounds are simple perfection. Each is forty yards by thirty, and shaved, I verily believe, every morning by some of Mr.Truefitt’s assistants, sent down on purpose. They are beautifully levelled and the pinks and blues of the rolling balls are resplendent in the sunshine. Croquet in the eyes of experts is not a mania, nor the imbecility of first or second childhood. It is a very fascinating and very difficult game, requiring nerve, judgement, unremitting attention, and great physical nicety. Judging from its effects on several lady and gentlemen enthusiasts, I think we may almost say already that it is the most absorbing game yet invented; and I can conceive some such enthusiasts imagining in their dreams some such croquet heaven as the Wimbledon ground in the dim cloudland of the hereafter.

Early on Tuesday certain strange mallets, with their owners, were collected together at the Waterloo station – flat mallets, cylindrical mallets, heavy mallets, light mallets, - and soon the Wimbledon croquet ground began to fill. The prize for the lady champion is a challenge silver-gilt tête-à-tête service, handsome and massive. It is valued at twenty guineas, and it must be won three years running to entitle the winner to retain it.   The champion’s prize is a cup valued at fifty guineas and this disproportion in the matter of the sexes is due, not to the fact that a male croquet champion is considered a more valuable object than a female croquet champion, but to the fact that the gentlemen entries (from which the prize money is chiefly drawn) are more numerous than the entries of the ladies. Mrs Walsh was the lady champion last year; Mr Peel was the gentleman champion. The champions remain calm and quiescent whilst the all-comers are contesting for the victory, and then play the conqueror……”

This quaint description appeared in the account of an early croquet tournament at Wimbledon at the All England Croquet Club. Little was it realised in 1872 that by the early 1890’s croquet was to be all but ousted from Wimbledon by lawn tennis. It was not until 1877 that the first lawn tennis championship was held there.

One may ponder how croquet tournaments have changed since those early days.   Of course the wearing apparel is one major difference (ankle-length dresses for the ladies with some astonishing hats, dark suits for the men, sometimes with jacket removed, with bowler hat or boater). The laws were then very different, not least because it was the sequence game, with a different court setting and 4-inch hoops. Only two years earlier the hoops were 6 inches wide. 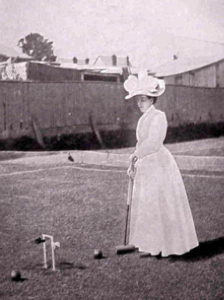 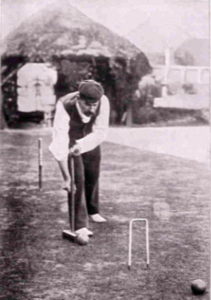 The tournaments must have been somewhat boring for the champions if remaining ‘calm and quiescent’ meant not playing at all until everyone else except one had been knocked out. Many clubs today have sundry edifices that provide shelter from ‘sleety wind or blazing sun’ although they no longer have thatched roofs, and so far as I know there is no club with a bar having a front with designs associated with church woodwork.

Although different in many respects, the game today has this in common. It is still, for most of us at least, a ‘very fascinating and very difficult game, requiring nerve judgment, unremitting attention, and great physical nicety.’